Oil makes the world go round. It is a required part of our modern culture, and without it, civilization would crumble with frightening speed. It’s used to power personal vehicles and shipping trucks, heating and electricity generation, as well as being used in the manufacture of chemicals/plastics/synthetic materials, and dozens of other extremely common uses.

The drilling and refining of oil is also an extremely dangerous practice, with leaks and explosions happening with alarming regularity, and causing millions upon millions of dollars of damage and negatively affecting huge portions of the environment.

With such a huge potential for damage, why aren’t safety regulations in place to prevent these disasters? How can they keep happening?

What causes a refinery explosion? 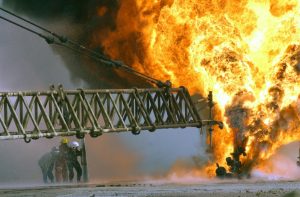 The process of refining crude oil is incredibly complex, using machines like desalter units, atmospheric distillation units, naphtha hydrotreater units, catalytic reformers, isomerization units, and various other terms which will be nonsense to 99% of individuals. The basic jist of it, though, is that crude oil enters, processing/refining happens, and end-products come out.

With so much equipment in the process, there is always a chance for equipment failure, but all of those systems are designed with failsafes and alarms, so the chance of failure leading to a catastrophic event is fairly small. The problem is that while there are quite a few safety systems in place, there is always a human element in the mix as well, and unfortunately, that is where the true danger comes in. Almost always, when a refinery or a rig explodes, it was due to lax safety precautions taken on the site itself, and/or skipping steps in testing and certification.

Case in point, in the 2005 Texas City Refinery explosion (which killed 15 people, injured 180, caused a shockwave that shattered windows over 1 kilometer away, burned 200,000 square feet of ground, and left the site out of operation for more than 2 years) was caused when a pre-startup safety checklist was skipped, certain knowingly-failed pieces of equipment were not replaced, certain safety thresholds were ignored, there was no communication between night and day shifts, and a diesel truck was parked too close to an overflow valve leading to a runaway engine. It was basically a chain of one failed safety check after another, leading to a catastrophic and fatal explosion, and complete equipment failure.

Aftermath of a refinery explosion

The aftermath of the Texas City explosion lead to BP being fined by OSHA in the amount of $21 million for their ignoring of numerous safety regulations. That was the highest amount that OSHA had ever fined an organization.

That was not an isolated event, either. Since the event in 2005, regulations have become more strict, and conditions in refineries and rigs have become better, but accidents still happen, and more often than not, it is due to safety requirements not being met or being outright ignored.

If you or someone you know suffered an injury due to a refinery explosion/failure, do not hesitate to get in touch with a personal injury attorney. You may have legal options to help you bring the accountable to justice.