Dangers of Working On An Oil Refinery

Throughout the years, Texas has been known for its massive oil industry and oil production. Although the oil industry has created thousands of jobs, it is a very dangerous line of work. There are many incidents that could happen at any time. Understanding the dangers of the job can help you prevent them if you’re working on an oil refinery.

Why Are Oil Refineries So Dangerous? 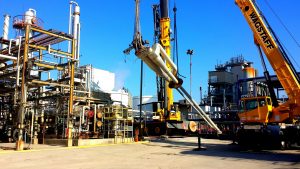 There are 141 oil refineries in the United States. These refineries stretch east and south of Houston, south of Los Angeles and northeast of San Fransisco. The U.S Environmental Protection Agency has reported more than 500 refinery accidents since 1994. Oil refineries are prone to explosions that can injure or even kill refinery workers, and pollute the air with acid and other harmful chemicals.

Unfortunately, most of the worst accidents that have happened on oil refineries could have been prevented. many times, skimping on safety regulations and precautions leads to these horrific accidents. When oil corporations don’t keep up with safety inspections and other regulations and an accident happens, they are to blame.

The difficulty with oil refineries is the pressure to produce in a timely manner. Because there is so much money in the oil industry, officials usually choose not to stop work when dangers seem imminent. They push the boundaries to their limits. Typically brushing looming problems aside, workers are told to continue working. Usually refineries end up okay, but there have been incidents where its workers weren’t so lucky.

It is the choice of the oil worker to stop and leave the area if they feel that something is going wrong. According to the Huffington Post, many workers are pressured to continue working.

In 2005 in Texas City, a series of explosions occurred at the BP refinery during the restarting of a hydrocarbon isomerization unit. A distillation tower flooded with hydrocarbons and was overpressurized, causing a geyser-like release from the vent stack, injuring 180 workers and killing 16.

Oil refineries are one of the most dangerous places to work. Using you instincts and taking extra safety precautions can help you avoid being involved in one of these kinds of life altering incidents.

How The Freeman Law Firm Can Help

If you’ve been injured on an oil refinery accident and need representation to help you get the compensation you need, contact one of our lawyers today.